The Forgotten Story of Lilydale’s Back Streeets 1880 to today 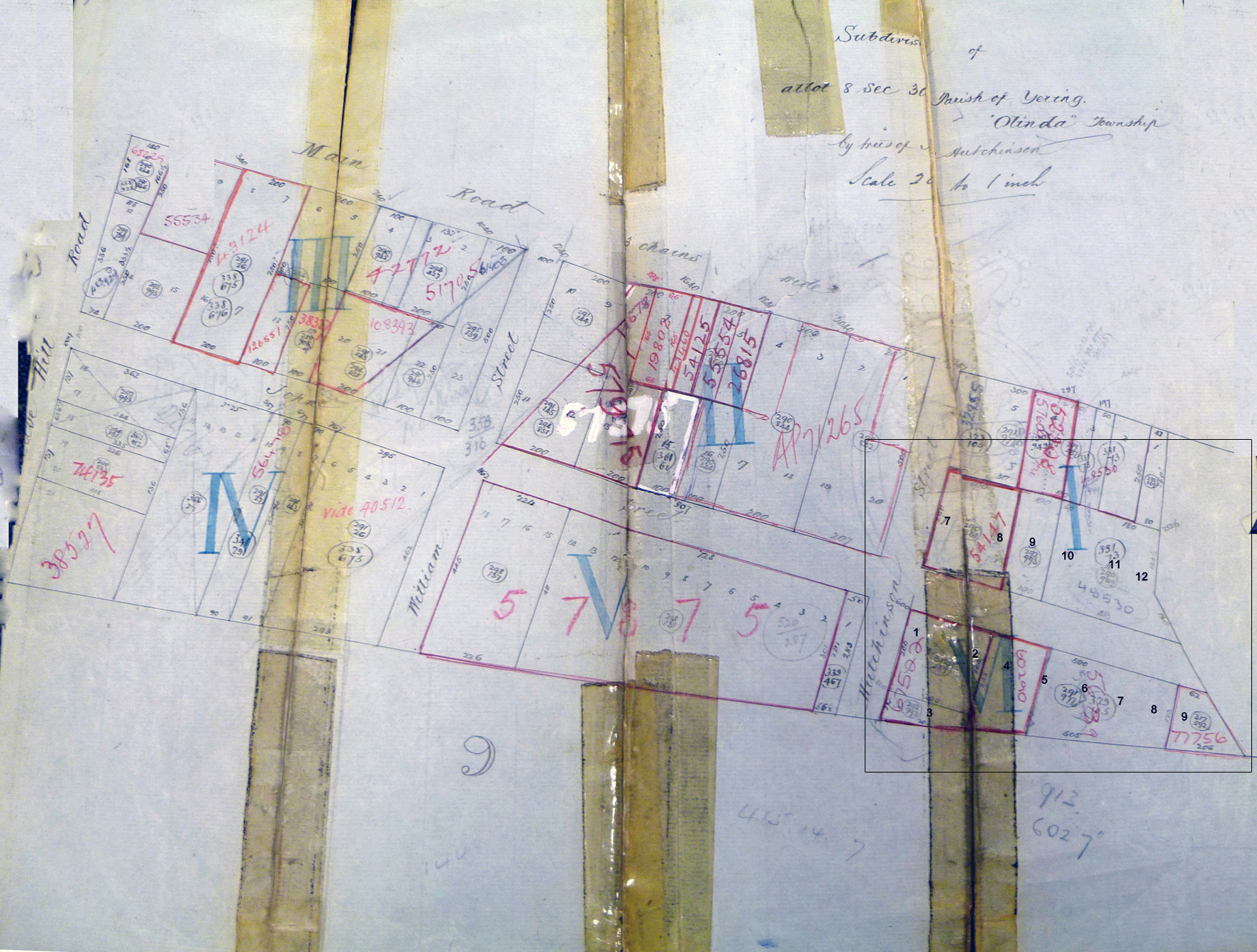 The Gun Alley area known as John Street. Left is the original subdivision map and right the map today showing the various properties.

Gun Alley was part of the Olinda Estate subdivision developed following the sudden and unexpected death of its owner John Hutchinson JP on April 3, 1880 aged 54 years.
Under the terms of his Will dated March 11, 1880, he appointed his brother William and friend Louis Deschamp as his executors. He directed that Allotment 8 be surveyed into allotments of not more that ¼ of an acre or less if required as soon as possible after his death to pay his debts and funeral expenses and that the residue be divided into one to his sons John and Robert Waddell and the other half was to be equally divided between his wife Eliza and daughters, Matilda, Sarah Eliza, Susanna Ellen and Margaret Eveline.
The General Law titles to the land show why Hutchinson made a new Will with the subdivision of the land. On January 5, 1880 he gave a Letter of Deposit & Power of Attorney to the Colonial Back of Australasia against a £355 he owed.

How did Gun Alley get its name?

From as early as the 1920s, John Street between the Olinda Creek and Hutchinson Street was called Gun Alley and the children from there were called The Alley Kids by those who didn’t live in John Street.
It seems to have been lost in the mists of time.
There are several stories given but none can be clearly documented:

Whatever the reason for the name, that section of John Street certainly was a dead end and ran behind the shops. It was also on the lower side of town and not included in the original township of Lilydale as laid out by Surveyor John Hardy in 1860 because it was rich alluvial land and swampy.
It was the working man’s part of town. Occupations of the tenants were mainly labourers and railway workers. The homes were simple and with only a couple of exceptions small weatherboard homes. The high side of Olinda Creek was Lilydale proper with wide streets, smart, larger homes on larger blocks and the owners were business and professional people. Writing in the Lilydale Express on August 24, 1945, well known author Eileen Finlay wrote about the approach to her home town, of John Street and the Olinda Creek.

I don’t think there is anything left for me to write about Lilydale. I have done its streets, churches, amusements, trees, gates and its people. But as a grand finale I will speak about the approach to your town.

Now this is a very important thing in any place. One wants to get a thrill of anticipation before one enters it. A drab approach and you dislike the town before you get there. It makes all the difference.

Now there are very many towns – and I know my Victoria – which have an outstanding approach. There is the wonderful avenue into Bacchus Marsh. There is the incomparable Jimmy’s Point at Lakes Entrance. There’s the amazing turn in the road with Foster lying beneath you, and the panorama of the seas beyond. There’s another sudden bend and you’re above the clustered roofs of Wood’s Point; and among many other places there’s the hill which you run down into the curling street of Gisborne. Here is Lilydale’s rival for trees. Then there is the famous hoary old clump of poplars as you enter Harrietville – how often have they been painted!

But none of these vistas can compare with the curl in the road on Melbourne Hill which instantly opens up, below you, the glorious view of Lilydale.

How often do cars pause there – and it calls for widening of the road at that curve, to act as a look-out.

There lies the town! It has been said that the name Lilydale is not good enough for it. It could do with one of those quaint, arresting names with which English villages abound. But, of course, we know the origin. It was named after the wife of its first pioneer – and rightly so.

There lies the straggling town beyond its fine entrance avenue. Nothing stately or important in buildings strikes the eye, but, taking the scene as a whole, we at once think of serenity and peace.

Below, nearly, Holstein cattle are browsing, and beyond them is the quaint old row of houses in John street, which I have seen flooded to their roofs.
Boldly stands out the bush nursing hospital – a splash of red. Cave Hill, with its gaping wound, is behind us, so we can’t see that; but the old three-chain road meanders along, and the reedy little creek, which never runs dry whatever happens, one can trace with the eye as it slithers through the town under its two bridges and cuts the valley in half. Away it goes, through the fertile paddocks and on to Yarra flats.

Strangers, pausing, never fail to speak of the Lilydale hedges. Some wise men of the past planted the hawthorns.

It is spring, and away to the left are cattle knee deep in grass; and beyond Christmas Hills can be seen. Further still rise the great mountains beyond Healesville, but our eyes are content to rest nearer afield.

Once “The Towers” was a landmark of interest, but it is mellow now with creepers and trees; and its original vines have not marched up to its doors for many years, so it merges into the general landscape.

In the spring the sun shines down on glinting roofs, hedges make boundaries, and trees, dressed in girlish green, will soon be matrons in full summer gowns.

People are so thrilled with the approach that they haven’t time to notice the somewhat stark and uneven wide street, or to wonder why it is left so stark and tree-less. It is a hot street, and cool trees would surely be an asset.

Looking down, one wishes there were a few stately poplars her and there to make it even more English and to throw autumn splashes of gold to mingle with the green hedges along the flats and the red berries of the hawthorns.

Oh, Lilydale, how green is your valley!

And now that peace has come, one looks down upon the town and there pauses for deeper thought. So many homes will be jubilant and rejoicing as their boys come home; but there are the stricken though proud homes too, to which no loved boy will ever return.

And I feel quite sure that wherever Lilydale boys have been – whether in hot desert sands or in the fetid muddy jungle – they have all at some time thought of their little home town, and found themselves saying within their hearts, “Lilydale – Ah, how green is thy valley!”

The map and stories about Gun Alley is currently being updated.